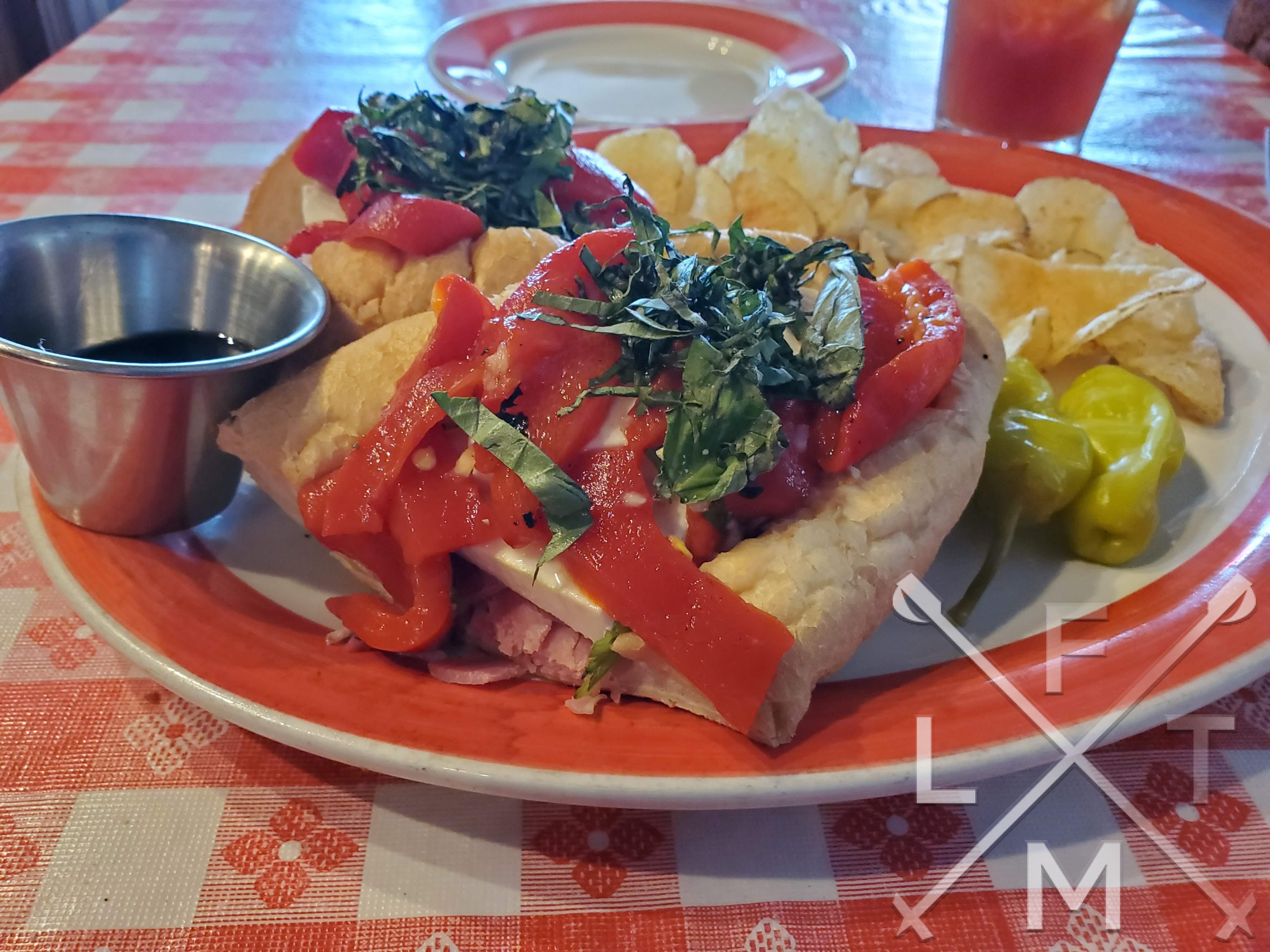 Do you believe fate may be a sandwich? Is it more likely that I took the wrong exit? Either way I found a really nice place to eat after my Staunton Overlook hike. I exited in Conifer and was trying to circle back to the bridge to get across 285 when I came to stop sign on Main St. To my left was a smallish building with some cars in the driveway and that is how I found JJ Madwells.

JJ’s is an Italian restaurant. They had some indoor seating that was spread out and another side room that I couldn’t really see into. They had an outdoor patio as well. The menu had some traditional Italian pasta dishes, pizza’s, calzone’s, sandwiches and some assorted other things. I ordered the JJ’s Favorite Sandwich and a side salad. More on that in a minute but first let me tell you about the bread they brought out to snack on.

The bread was nice it had a nice crisp crust (which was important for dipping) and was soft in the middle. The marinara sauce that they brought with it for dipping was some of the best that I have ever had. I am not one for tomato based sauces usually but I couldn’t get enough of this one. It was light and didn’t taste overly acidic like some. At times when I have a tomato based sauce I have heart burn before it touches my tongue but this one was so smooth it didn’t effect me at all. I almost wanted to change my order several times just to get some refills on this sauce!

Next was the house side salad. It seemed basically like a Caesar with romaine lettuce and a single slice of tomato. I got honey mustard dressing which was really good. It had a nice sweetness to it without tasting really sugary. My only slight complaint with the meal is that the lettuce was pretty wet. It seemed like they washed it but didn’t let it dry enough. It wasn’t enough to stop me from eating the entire salad.

JJ’s Favorite Sandwich was pretty much amazing. It was prosciutto, large mozzarella medallions, roasted red peppers, with fresh basil. There was also a balsamic vinaigrette on the side. My plan was to eat half of the sandwich after the bread and salad. That plan was poorly conceived. This was one of the best sandwiches I have ever had. The ingredients were very fresh and the red peppers were done really well. The mozzarella didn’t overwhelm the other flavors even with the big chunks. The prosciutto was a relatively thin layer but still held its own in the flavor department. I ate the whole thing.

I was so happy that I accidentally found this place and will definitely plan on going back. Everything was really good. Also, the place was really busy for a Wednesday afternoon. I was impressed with my server as well. She had one of those super high energy personalities and was running around the place and always was very positive and just genuinely nice.

This really was a great experience. If you find yourself in Conifer you should give them a shot! I have added JJ’s to my map as well if you want to find where to eat on a hike. You can find the map here.

If you have a suggestion for a great local restaurant you think I should try you can email me at fatmanlittletrails@gmail.com or follow me on these social media platforms.