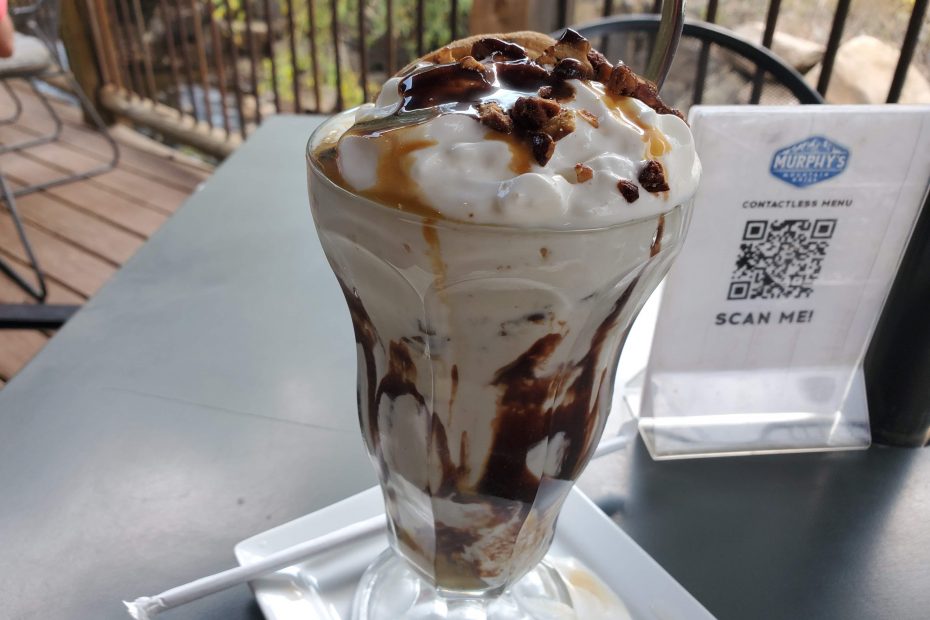 Murphy’s Mountain Grill actually followed me on Twitter after my last time to Evergreen so I headed up to that general area to do the Chavez and Beaver Brook Loop and then figured I would head over and check out Murphy’s.

I got there right as they opened so was the only one there and had a good view of the place. What hit me first was that it really felt like a mountain restaurant with wood all over and a nice patio next to a creek.

The waitress told me they were known for their burgers and mike shakes (more on this later) so I scanned the menu and found “the Murph”. The Murph had chili dusted bacon, avocado, pepper jack cheese, Saddle Back BBQ sauce, Sriracha Mayo and what they called Onion Frizzles which were small fried onions.

A nice feature at Murphy’s is that you can have each “burger” with a beef, elk, or grilled chicken patty. I decided to go with the elk as it is a leaner cut and I figured that would make this down right healthy!

Yep it was as a good as it looked. The Elk didn’t taste gamey at all and was cooked to a really nice medium well. It was a little bit softer meat than a beef burger but was still very good. The avocado almost got lost from a taste perspective but added a nice creamy texture to counter the crispy onions and bacon. The bun came out toasted and held up well to what was a pretty messy meal. This was a really good burger.

The burger came with a “house cured pickle” that I saved for the end. The pickle was different but I really liked it. It was sweet and tangy. I thought on the first bite that it was going to be sweet like a bread and butter pickle, but the tang of vinegar came in at the end of the bit to give it a nice kick. I really liked it.

I ordered my milkshake late because I couldn’t really decide so it came out at the end. Holy slap a pig.

This was the “Dirty Dawg”. Vanilla Ice Cream. Chocolate Chip Cookie. Carmel. Malt Powder. Chocolate sauce. Candied Pecans. I don’t need to say anything else but I will. Amazing.

I have driven past Murphy’s numerous times on 74 on the way through Evergreen. It is east of that main strip of old downtown Evergreen. I am really glad they saw me on Twitter and even more happy that I stopped there today. If you find yourself in the Evergreen area give Murphy’s a shot for sure.

I have added this restaurant and all of the restaurants I have been to on my interactive map you can find here. If you have a suggestion for a restaurant or a comment feel free to email at fatmanlittletrails@gmail.com or follow me on any of the below social media platforms.