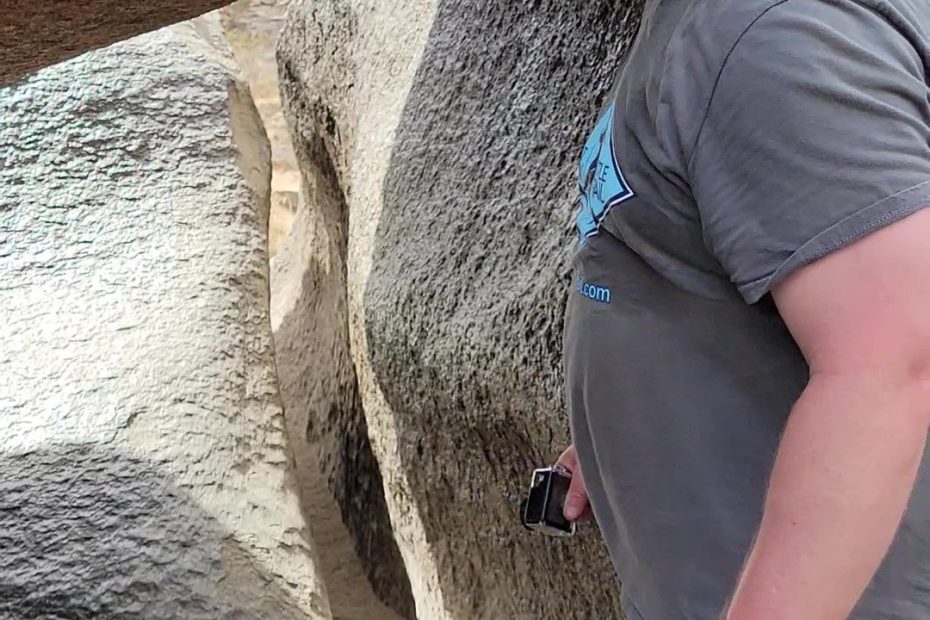 One of the reasons for heading to Arizona on the Great Southwestern Road Trip was to try my luck at Fat Man’s Pass. You see, every time I would google Fat Man Little Trail when I started my website I would stare down this gauntlet known as Fat Man’s Pass in the search results.

How could the Fatman himself see something called Fat Man’s pass and not want to try to slay that beast. It is not like I walk by an all you can eat buffet without at least putting my best foot forward.

So while in Arizona it was time to give it a shot.

Looking for the Pass

Fat Man’s Pass is on the National trail and part of the Mormon and National Loop. I thought for sure something with the social media profile as esteemed as this pass would be pretty easy to find. What I found was that was not the case.

First I had to climb a big hill

Then someone pointed in me in the wrong direction and what should have been a two mile jaunt turned into an almost seven mile hike. A long hike in the exposed Arizona sun with temperatures in the 80’s already put my body in a bind.

Maybe the layer of sweat would add a bit of lubrication just in case it was a little tight. Now I was starting to feel confident. I have this.

Since there were no signs I ended up wandering the dessert for a bit and I don’t know if I was hallucinating or not but every space between two rocks made me wonder if I just finished the pass. Two rocks could be four feet apart and I was sure that was it until someone told me I was wrong. I was getting cocky now.

I was also starting to get a bit of a crowd gathering. My fan base began to build as legions (3-5 people) of supporters were on my heels as we searched the magical crevice. The fact that these “legions” were also looking for the pass had nothing to do with why they were following me.

Finally we spotted it. Are you freaking kidding me?

First of all I am a pragmatist. There is a trail around the pass that takes about an extra 30 seconds. Why would these skinny people walk through this slice of claustrophobic nightmare material. What have I done?

The group of people who listened to me run my mouth had grown to about 10. Holy crap, I actually have to try this now. Dude why can’t you just shut up every once in awhile. Well my motto is “Screw It, I’m Trying”. So here goes nothing.

Now for those of you saying that the pass is not physically possible, I completely agree with you. Or I did. Then I realized that all of my “fans” were about a third of my size. They had no problem proving my physics experiment wrong.

Warning! Warning! If you don’t like tight spaces don’t watch the next video.

Here is what going through the pass actually looks like. Thank you so much to the wonderful new friends who walked through for me!

Well I learned some lessons. The laws of physics don’t bend. Rocks don’t move and Yoda was wrong when he said “Do or do not, there is no try”. I tried and I failed but I had a blast. That is the mentality of “Screw it, I’m Trying“. You might not always get the results you want but at least you gave it a try. A year ago I wouldn’t have been able to make it to this pass let alone try to go through it.

I remember when I was too embarrassed to hike around Colorado because I was so out of shape and didn’t want people see me struggle. Now, I encourage a group of people to watch me attempt the impossible.

Life is short so “Screw it, I’m trying”.

More from the FatMan

If you enjoyed this post and me making fun of myself you might like some more from my Thoughts page. Such classics as “To Pee or Not to Pee“, “Bad Days and Bidets: Just wash it off” and “Hiking alone not Lonely Hiking” await you there. If you have any comments or suggestions feel free to email me at fatmanlittletrails@gmail.com. You can also follow me on any of the below social media platforms to keep the conversations going.

Be one of the first to …