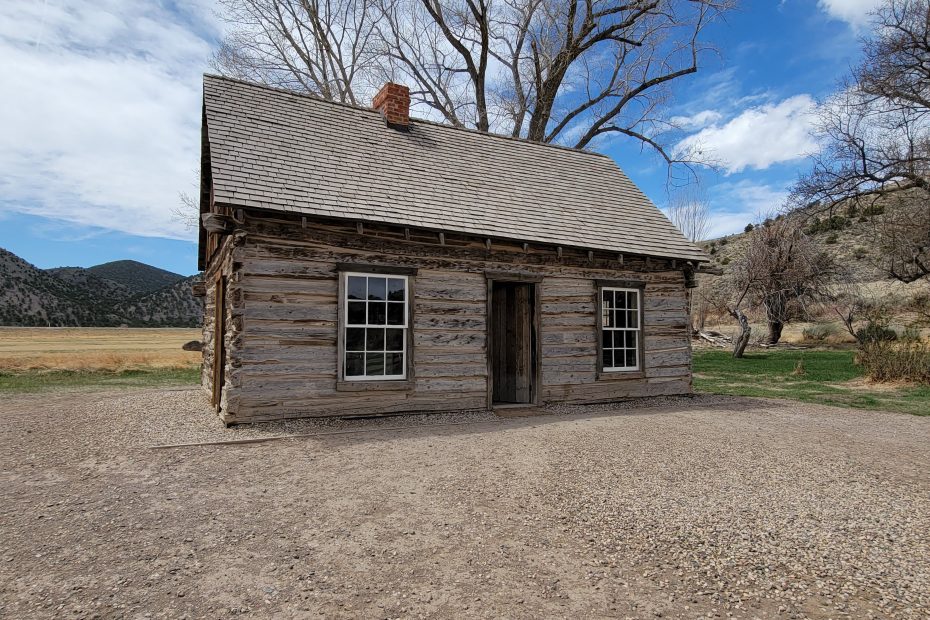 At the beginning of my road trip I stopped by the cemetery in Glenwood Springs, Colorado and saw the memorial to Doc Holiday. While I was there I found the grave of another infamous figure from the Old West, Kid Curry. Kid Curry ran with the most successful train robbing gang in history which was led by…you guessed it, Butch Cassidy! So when I saw a sign for the Butch Cassidy Childhood Home on the roads of Utah I had to stop.

Butch Cassidy and his close friend, The Sundance Kid, were part of a gang known as the Wild Bunch. According to the Wikipedia page the gang was previously known as the “Hole in the Wall Gang” based on an old hideout in Wyoming. Butch Cassidy’s Wild Bunch robbed a couple of trains and at least one bank before splitting up. It is said that Butch and the Sundance Kid fled to Argentina to avoid the Pinkerton’s who were searching for them.

Their fame seemed to come from the amount of money that these robberies netted the gang. Around thirty to sixty thousands each! Which was a nice chunk of change back in 1900. Most importantly Hollywood took notice and made two movies about Butch and Sundance so now they will live on in infamy.

The home was a very modest one room wood cabin. It had a single bed and room for a table and some chairs. The property also had a small wood barn. While the home didn’t look like much it did have a pretty good sized chunk of farmland attached to it that I have to assume was pretty nice for that time.

Butch lived in this home with his parents and according to the US census of 1880 six of the thirteen children. I can’t imagine fitting 8 people into the one room but the world was a whole lot different back then.

The home and the time that Butch spent there is in the process of being researched and restored. If you are a history buff and find yourself in the middle of Utah one day, this is a good spot to stop. I think I was only there for about 20 minutes but it was nice to see how people lived back in the 1880’s.

One of my favorite things about taking a road trip is seeing little bits of American history like this. If I hadn’t had seen Kid Curry’s grave I never would have had Butch Cassidy on my mind. I may have never stopped. In fact, I had never even heard of Kid Curry until I saw his grave.

Each one of these small stops on a trip remind us of the past that has shaped our future. It tells the stories that remind us of how the world once was. Through the hustle and bustle of today’s world and the housing boom of the last year, it reminds us that 8 people once lived in a one room farm in the middle of Utah…with no bathroom!

I am glad I made this stop and learned a bit more about an outlaw. Before writing this post I had only heard of him romanticized in films. Each stop along the road brings another story back to life.

Butch Cassidy’s childhood home is located on Utah Highway 89 in Circleville, Utah. That is located in Garfield county. There isn’t too much around other than a sign to point you in the right direction. There was a small restroom at the site.