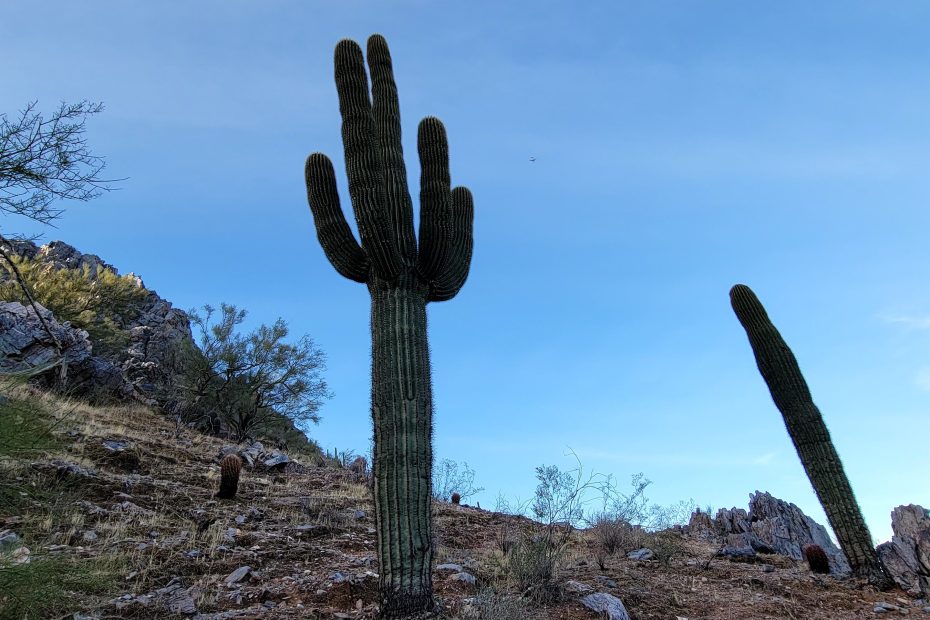 On my trip to Phoenix I was looking to hike the iconic Camelback Mountain but it requires more climbing than I am able to do so I went with the next best thing in the same area. The Freedom Trail (#302). The Freedom Trail walks around the perimeter of Piestewa Peak and provides views of the whole park.

The Freedom Trail is part of the Phoenix Mountains Preserve. This preserve is incredibly busy and finding a parking place is the first summit to complete! There are also several trails around the preserve depending on what hike you are looking to do. The Freedom trail loops around Piestewa Peak and connects with the Summit Trail. You have the option of starting with Summit or saving it for the end. I decided to go around to the east first and finish with the Summit Trail.

The Eastern side of the trail is a nice hike along the base of Piestewa Peak. It will be about 2 miles as you travel from the south to the north of the peak. The trail has a gradual incline for the first mile and passes near some washout areas. Peaks rise up on either side which make for a nice walk, especially early in the morning.

As the sun rose on this morning so did the trail. At the 1.3 mile mark you will need to make the first of two big inclines on this loop. This first incline will take you up almost 400 feet of elevation on in a half mile. The incline almost touches 30% grade in places so its no joke. From the top of this incline you do get a good view of more of the park.

Once you make it to the top of the first incline it is time to head back down the hill on the backside of Piestewa Peak. I found the west side to be a bit more challenging. While the eastside was mix between dirt and rocks I found the westside to be more rocky. There are also several trails that intersect with #302 on the backside which can get a bit confusing on where you need to be. You do get a pretty nice view of the city from the west side of the peak.

While the east side of the trail is a gradual incline the west side is a gradual decline. (This is taking the trail counter-clockwise, it would be reversed if you start with Summit Trail). Over roughly a mile and a half you will descend down around 550 feet in elevation on the westside. Again the trail is rocky but the footing is OK.

When you get about as low as you can it is time for the second climb! You will intersect with the Summit Trail and need to take that to complete the loop. The summit trail gets a little steep. In just four-tenths of a mile you will incline about 400 feet with grades consistently 25-30%. This wore me out a little bit. At the top of this hill you can either continue up to the top of Piestewa Peak or head back down to the parking area. Not going to lie, I was tired and decided to call it a day here.

After deciding not to continue up to the Peak it was time to head back to the bottom. At this point it was really crowded and the Summit Trail is an old broken up road. So there were large sections of concrete or stone broken and a bunch of people and footing got a bit tricky to stay on a good part of the path and avoid people. It isn’t too difficult but something to keep in mind as you prepare. To do this again I would have reversed and taken this route up first when less people are around so I could make sure I had good footing the whole time.

As I continue to try add a bit more video to my hikes here are this weeks offering. The short edit is more pictures and narration about the hike. This weeks hiker edit was from the longest hike I have done so I really had to speed it up. Might have gone a little too fast but feel free to let me know what you think.

If you don’t have the AllTrails app you might want to check it out, I really love mine. It records your progress and is a great way to search for hikes that are nearby and gives you difficulty measurements. According to AllTrails today’s hike was around 4.67 miles and had a total elevation gain of about 1,145 feet including undulations. That put the high point at around 2,106 feet. I was also moving for a total of 2 hours and 20 minutes.

This one was pretty tough with two separate big sections of elevation gain. That was without going to the featured peak. The rocky terrain also made for some extra steps to ensure descent footing. Here is my step count from my Fitbit.

The Freedom (#302) trail is a cross between dirt and rock where the higher you go the rockier it gets. The eastern portion of the trail appeared to be remnants of an old concrete or stone roadway that had crumbled. This made for some challenging footing as the crowd made finding solid footing amongst the slabs difficult.

The Freedom Trail (#302) is part of the Phoenix Mountains Preserve. The preserve is a big outdoor park with several hiking trails and peaks available. It was remarkably crowded on a weekend morning. The sun was rising when I arrived and I had to park in the second auxiliary lot. By the time I was leaving there was a line of cars trying to get in and cars parked all over the side of the road. There were some bathroom facilities at the main parking area. I did not see a fee station at the park.

The Freedom trail was a nice introduction to hiking in Phoenix. So far on the Great Southwestern Road Trip I had only hiked on terrain that was very similar to Colorado. New Mexico and Northern Arizona are at elevation and had that rocky dessert feel. The Freedom Trail gave me my first cactus sightings and was a different feel.

The vibe felt more like a workout than the wonder wander I am more used to. The views in this area weren’t anything that was going to make you hold your breath but plenty of people were grinding on these trails to get a morning workout before the sun got too high. The trail was enjoyable but not what I was accustomed to. I do think I would come back and try some of the other peak trails though.

I have added this hike and all of my hikes to the interactive map page you can find here. If you have any suggestions for hikes or comments feel free to email me at fatmanlittletrails@gmail.com. You can follow me on any of the below social media platforms. Happy Hiking!